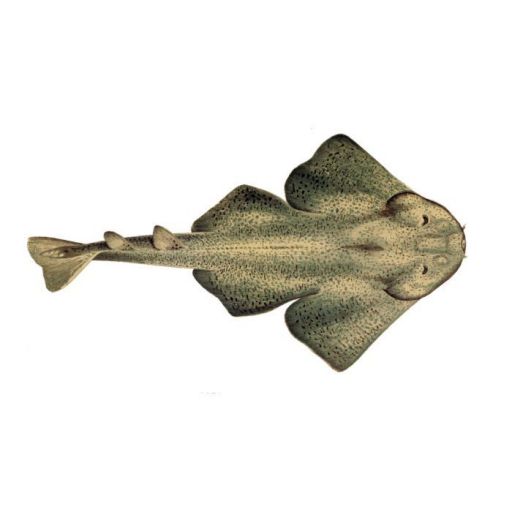 The common stingray (Dasyatis pastinaca) is a species of stingray in the family Dasyatidae, found in the northeastern Atlantic Ocean and the Mediterranean and Black Seas. It typically inhabits sandy or muddy habitats in coastal waters shallower than 60 m (200 ft), often burying itself in sediment. Usually measuring 45 cm (18 in) across, the common stingray has a diamond-shaped pectoral fin disc slightly wider than long, and a whip-like tail with upper and lower fin folds. It can be identified by its plain coloration and mostly smooth skin, except for a row of tubercles along the midline of the back in the largest individuals.

The predominant prey of the common stingray are bottom-dwelling crustaceans, though it also takes molluscs, polychaete worms, and small bony fishes. It is aplacental viviparous: the embryos are nourished by yolk and later histotroph ("uterine milk") produced by the mother. Females bear 4–9 young twice per year in shallow water, after a gestation period of four months. The common stingray can inflict a painful, though rarely life-threatening, wound with its venomous tail spine. During classical antiquity, its sting was ascribed many mythical properties. This species is not sought after by commercial fisheries, but is taken in large numbers as bycatch and utilized for food, fishmeal, and liver oil. Its population is apparently dwindling across its range, though there is not yet sufficient data for the International Union for Conservation of Nature (IUCN) to assess it beyond Data Deficient.